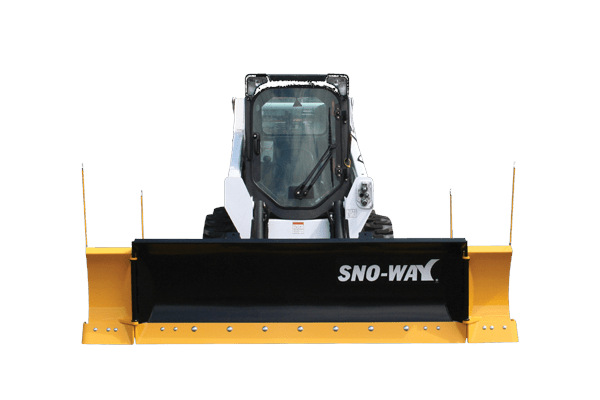 8' SKID STEER PLOW WITH WINGS
Get all the features of the bigger Revolution series plows in a smaller package with the 26R series snow plow blade. For those times when an 8 foot plow width is all you need, but the versatility of going from a straight plow to a box plow is ideal.

Fields with asterisks* are required. Please email our helpful staff with any questions or comments using the contact form.

Send to a friend »

Send To A Friend

Fields with asterisks* are required. Your friend will receive an email that contains a reference to this page. Please send this email only to people you know who would be interested in this information.

The Sno-Way 26RSKD plow packs a lot of punch in a small package! Go from moving 1.1 cubic yards with a straight 8' plow to moving 36 cubic yards with this plow when the side wings are forward making it a box plow.

The patented Double Wing Mechanism offered on the Revolution Series of plows greatly increases snow moving capabilities. The hydraulically-controlled blade wings pivot 150 degrees allowing the plower to turn his machine into a box plow, a scoop plow, a wide straight plow, a curb-cleaning plow, a half scoop plow and anything else the job requires.

In the optimal positions, the Double Wing plows will always out perform any V-Plow, Expandable Wing Plow or Straight plow with wings.

VIEW ALL OUR LAWN & GARDEN EQUIPMENT FOR SALE