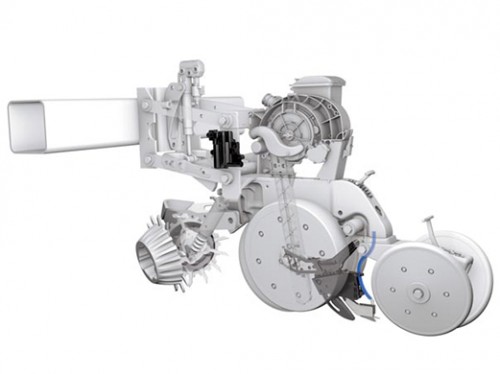 vApplyHD is the industry first, on-row liquid control product which incorporates flow measurement and control into a single device. Its row-by-row features include turn compensation, swath, automatic flow balancing, and variable rate prescription execution. The module is easy to install, simple to use, and designed with industry leading flexibility. The vApplyHD module is used, without modification, from the lowest pop-up rates on the planter to the highest sidedress rates, across the full range of speeds. 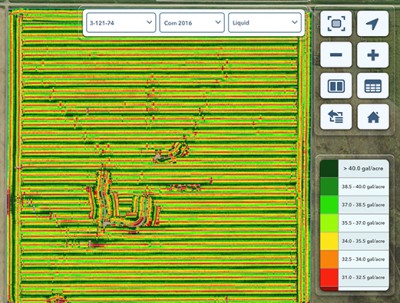 This map comes form a 24 Row KINZE 3600 in South Dakota running a hydraulic piston pump. The grower is running 28 with a shot of ammonia sulfate, running a 34 gallon target rate. On average he's hitting his rate and by the measure of red balls and a single flow meter he's doing well. By the measure of FlowSense we have got some work to do. We see his 4 sections are each running at a different rate, so he is inadvertently running a very intriguing "hidden hunger" strip trial on his farm. From high to low row we average 27% variation. Imagine if your meters were running 27% population variation low to high? That would be cause for stopping the planter. 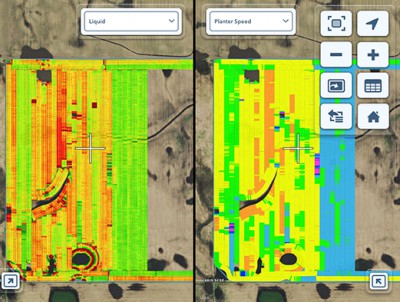 This map comes from a ground drive pump system. The row-by-row variability is moderate (about 10%), but the field variability is quite large (20%). Looking just at the colors on the Liquid map it's tough to put your finger on what is happening. But as we look at SplitView of the Planter Speed map, we start to see the issue. Delivery changes across the speed range that is in this field. We see application of 37 gpa at 3.5 mph and only 30 gpa at 5 mph. This grower calibrated the pump by riding on the back of the planter through the field at about 4.5 mph. 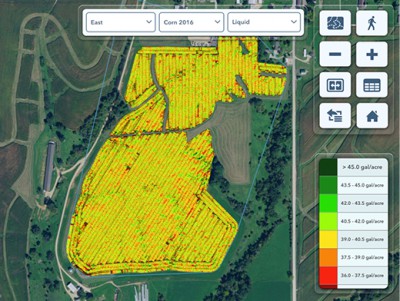 This map shows another pattern we've become familiar with as we've worked with growers. After spending some time digging into this pattern we discovered with FlowSense showing pulses caused by the pump turning into flow pulses at the outlet of the attachment, we learned the flow rate of each row goes high, low, high, low with each pulse. This is a type of flow variation that we had not expected.

After spending some time on the planter to understand what was causing the pulses, we found out what every plumber has known for the past 100 years, if you have water hammer problems you need a standpipe or an accumulator. By providing a pocket of air inside the plumbing, the pulses from the pump are dampened at the accumulator leaving a smooth pressure and flow profile at the rows. Check out the video below to further understand this issue and how we've solved it. 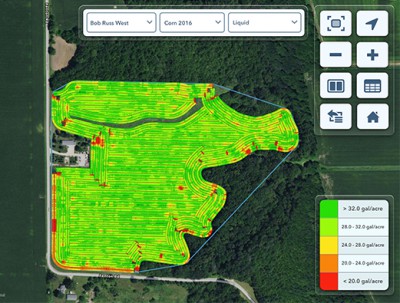 This map is from a grower running vApplyHD on a 16 Row John Deere in central Ohio. His farm average target was 5 gpa of 9-18-9. He called at the end of the year and said that he had seen a 20% product savings year-over-year beceause of the row swath of vApplyHD. We asked him what he did with all the money he saved at the retailer. Since he already owned it he decided to see what happened when he put the extra through the Keeton. So he ended up increasing the rate to 6 gpa. Last year, he put the same amount of product on his acres, but only 5 gpa were next to the seed and 1 gpa was spread across the end rows. 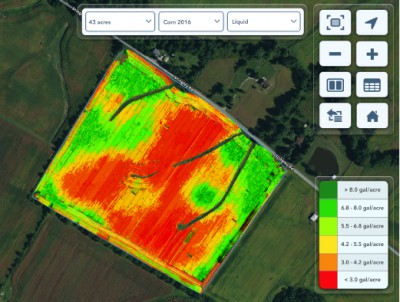 Apply Precisely on Every Row

This map shows vApplyHD being used with a variable rate fertility program in central Ohio. On the dark black soils this grower drove population up and pulled back on starter, in the lighter soils he pulled back on population and pushed the starter rate. On this field in particular he saw a 16 bu increase by moving from not using variable rate seeding or fertility to using both.

By integrating flow measurement and flow control into a single device and installing it out at the point of application we are now able to implement row balancing, row swath, turn compensation, and row-by-row prescriptions, drastically increasing the percentage of ears in your operation that receive the full fertility program at the right place and the right rate.

VIEW ALL OUR LAWN & GARDEN EQUIPMENT FOR SALE